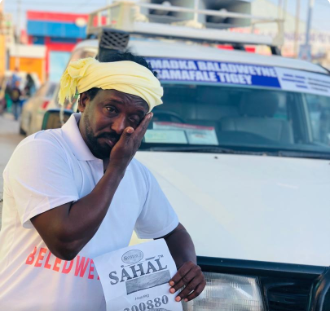 I’m sure you’ve guys heard about the floods happening in Beledweyne. I don’t need to add to the hundreds of pictures online showing the damages or people waist-deep in water. I do want to share an image that really moved me, taken in Garowe:

I admire this man so much. And anyone in Garowe, or other parts of Somalia that are investing their time, money, and resources to help their own. May Allah reward them.

Being educated in the west came with a lot of conceptions I am working actively to unlearn. One of them being that there needs to be some sort of western entity, whether a non-profit organization or a foreign government, present for an issue to be solved. The idea of people within a third world country, solving the issue alone in their own home, is never taken seriously. You’ll come across hundreds of articles talking about solving a third world crisis, and they’ll speak about the people there as if they are some mute, disabled humans, without intellect. Without their own theories, dreams, vision for the country. “We know what the problem is, we know how to solve it” they’ll say over here. And that notion keeps them socially, culturally, and politically at an upper hand.

Seeing this man made me ashamed on how wrong that thinking is. Who else cares more for the well-being of a country than the one who it belongs to? Why should I invalidate their efforts by giving more value to foreign solutions over indigenous ones? Diasporas need to be very careful in not continuing the cycle of colonization by coming in, not listening enough to the people actually living there & projecting their ideas of what the people should live like. I see that all the time. Many times it’s not even our own ideas- but what we ideas we were taught to have (to the benefit of someone else). It’s really a process sitting down with yourself and asking, “why do I believe these theories and definitions in my head? Is it something I was taught or did I come up with it on my own? Who is really benefitting from it?”

Remember the October attack that happened in Somalia last year?

This was the youth in Somalia volunteering in cleaning up some of the attack. Not some NGO/non-profit workers, heck not even a diaspora. These were Somali-born, Somali-speaking youth, deciding on their own time to do something. There are millions of these kinds of people alive and ready in Africa. They don’t want handouts, they’re just missing the resources.

I love the idea of supporting our own, with our own, I hope to have a career in academia (inshallahhhhh 🙏🏾) so I hope with whatever I end up doing, in my own way, I can give some of these youth some resources to achieve the ideas that they have in their minds, not projecting someone else’s. And I hope that’s the goal for all African diaspora, in all fields. I don’t need (or even want tbh) validation from the UN or some fancy tittle to be able to do this.

Seeing this really reminds me why I’m working so hard in school. With loans, overwhelming workload, failures, the loneliness, it can get blurry why I’m even doing this in the first place. When I see someone like this man pictured above, I just think, subhanallah, who am I to complain, a lot of people would kill to have the resources I have in front of me. I need to make something for myself so I can actually do something for them, instead of just complaining on twitter.

I had one professor say to the class at the end of the semester, “no matter what you end up doing in life, don’t ever forget there’s a woman and her child suffering out there.” I always keep that with me. It’s easy to get caught up in life, and forget exist on a planet with other people. The more we forget that, the more others take advantage. I’m telling you, my friend, our dreams are really within our reach, it’s just a matter of how hungry and how patient we are to be able to achieve them. If we build high enough, we won’t need anyone but us.

An ayah to reflect on:

يا أَيُّهَا الَّذينَ آمَنوا إِن تَنصُرُوا اللَّهَ يَنصُركُم وَيُثَبِّت أَقدامَكُم
O you who believe! If you help (in the cause of) Allah, He will help you, and make your foothold firm.