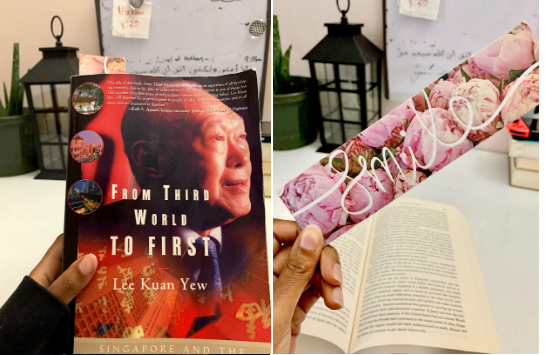 If you guys are interested in politics or state building I really really really recommend this book (btw peep my bookmark.. I’m so #cute) I know most books that about this topic are heavy to read but this one isn’t like that I promise. It’s both enjoyable to read and you’ll learn a lot. It’s a biography of Singapore’s first president & his thought process as he led his country after decolonization. Some of my fav quotes:

(basically any of these huge companies you see everywhere, that have factories in poor countries)

“…economics argues that MNCs continued the colonial pattern of exploration that left developing countries selling raw materials and buying consumer goods…MNCs controlled technology and consumer preferences.. exploits the people and keeps them down. Third world leaders believed this theory of neocolonial exploitation, but Keng Swee and I were not impressed. We had real life problems to solve and could not afford to be conscribed by any theory or dogma… Our duty was to create livelihood for 2 million Singaporeans. If MNCs could give our workers employment…then we should bring in the MNCs”

I love this so much. Sometimes people get so caught up in the colonial discourse they forget about real life problems. It’s not everyday we as 3rd world nations are the victims. If you have a leader that’s aware and smart enough, I really think he can tango with the system and win. And just because someone decides to work with a system you deem as ‘cancelled’ does not mean they have lost their soul. They are smart enough to manipulate the system to their advantage.

“After independence, I searched for some dramatic way to distinguish ourselves from other Third World countries. I settled for a clean and green Singapore…I knew when a country and its administration were demoralized from the way the buildings have been neglected-washbins cracked, taps leaking…. [So] We planted millions of trees, palms, and shrubs. Greening raises the morale of people and gave them pride in their surroundings… we did not differentiate between middle and working class areas”

“Perseverance and stamina were needed to fight old habits: People walked over plants,trampled on grass…and it was not just the poorer people who were the offenders. A doctor was caught removing from a central road divider a newly planted valuable pine which he fancided for his garden. To overcome the initial difference we educated their children in schools…they brought the message home to their parents…No other project has brought richer rewards to the region”

This is by far my favourite thing ever. Anyone who has been to a 3rd world country knows how horrible 1. Everything looks and 2. The habits people have developed. And I know when re-building a country those are the last thing on peoples minds but honestly I think it makes a world of a difference. At the end of the day, people don’t want to survive, they want to live, so making a place more livable will make people want to protect it just a little bit more. Morale & pride are really important.

All in all, I love this book because I love solution based thinking. Too many books of this nature (especially regarding Africa) talk about the tragedies that happened, the failures, the corruption, and to be honest I don’t really care for all that. I feel like that type of perspective constantly thrown at students breeds pessimistic, risk-averse leaders, who are unwilling to try new methods and be innovative. And what’s the point of smart people if they are too scared?

I hope that changes in the future. I hope to see bold kids, firm in their beliefs, carrying indigenous African thought. For too long we have been molded by hands that weren’t our own. I have faith in the dreamers!!!!!!!!!