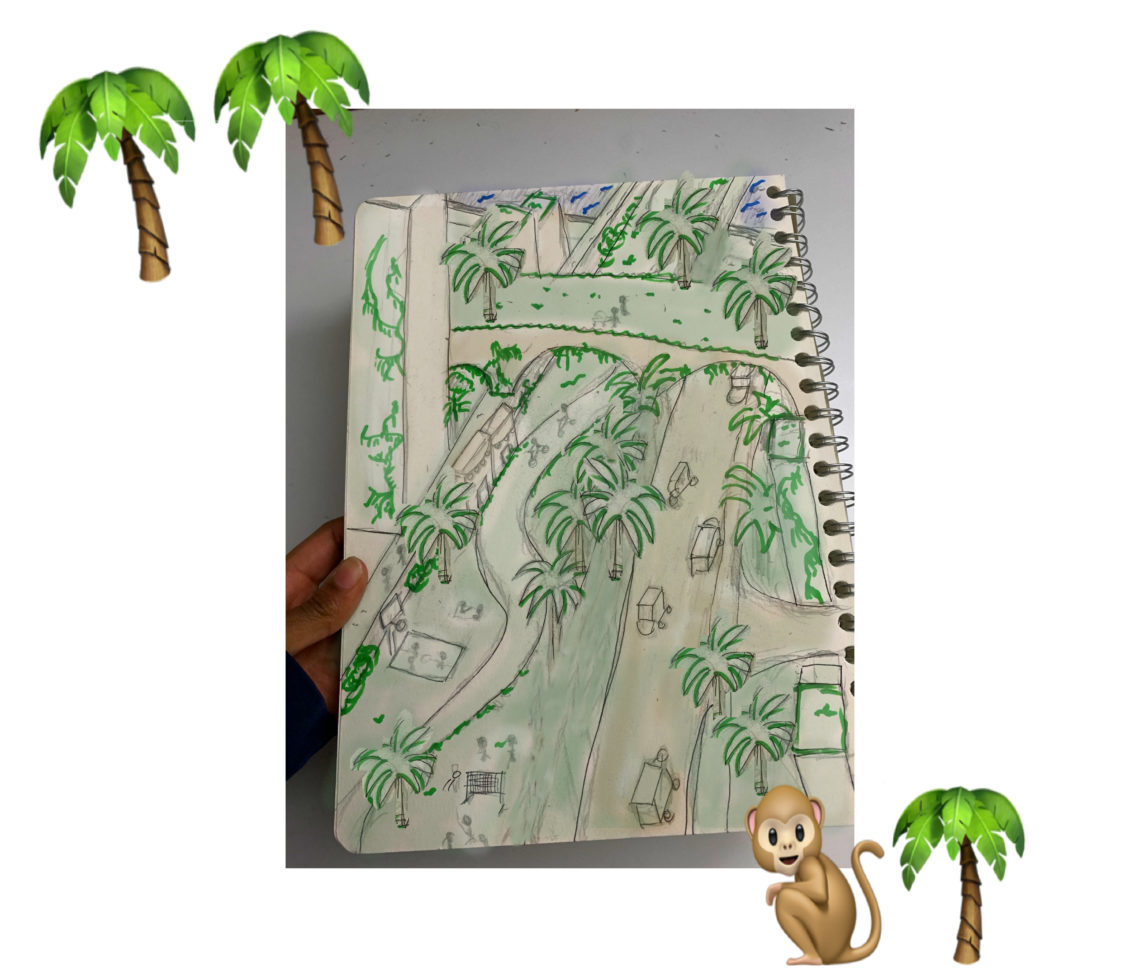 This is 100% a purely a hypothetical scenario. I would love some feedback on the feasibility though, for no reason other than for my own personal enjoyment.

I wish I could draw because the picture in my head and the one I drew is not the same 🙁 I hope you get the gist though- I just love coming across cities where the roads aren’t the centre of focus. That’s probably my favourite thing about small towns. It’s like a visual reminder that there is rarely ever a real reason to rush during our day.

It’s so sad to me that we have detached ourselves from nature in the name of modernity. I really believe there’s something nature does to the brain that we have not yet comprehended, and the lack of its effects is apparent in the west. In my *100percentpurelyhypothetical* city, there would be no separation between the two. I don’t know if you ever watched those architecture documentaries, where the architect designs homes around the natural terrain, rather than destroying it? Beautiful!!!! There is a humbleness to that I admire.

Also I don’t know if you could tell from my drawing but there’s no lines on the roads, and traffic is going in both directions. If you ask me, we have made too much rules as humans. If there’s a road and there are cars that should be enough. Honestly.

Let’s say in this city I also had control over how every corporation runs (not as a dictator, I would simply ask nicely)

I really enjoy those small indie company vibes, where life seems to merge with work. Meaning the presence of children at the office is the norm, you make your own hours, there is a huge interest to cater to an individual’s specific needs (essentially community-based living).

I wish I knew more about this, but I really believe in the concept of only local or small businesses, if you look at ***any** problem that a western country is facing, whether it is a political, health, or social issue, it really boils down to large corporations that have too much power, forcing someone’s hand to their benefit. Humans have proven time and time again that we cannot be trusted with too much power and wealth.

Something to think about

I’ve always loved city life & the hustle that comes with it but the older I’m getting I really am realizing there is a lot of dirty laundry hiding behind the noise. A lot of sadness too.

It’s so crazy, my experience in Somalia, I would see family members heading to work and not only face the labour of the day, but also the risk of running into a bomb, a shooting, and any risks of a third world country. There are not a lot of opportunities to generate an income, but I swear, these students and workers were much much more happier than the people I am surrounded with right now. Despite the safety, security, and abundance of entertainment here. They talk to each other a lot more. They are more present.

It really caused me to reflect, If the ‘poor’ are happier than the rich, is richness the goal? If those with all the success in the world are constantly telling the world they aren’t happy, why do we continue to rush to join them? Where are we really going?